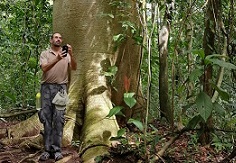 The Barro Colorado Island, BCI, it is located in Gatun Lake, by the Panama Canal main navigation channel is a biological reserch center  managed by The Smithsonian Tropical Research Institute, STRI.

It was formed with the creation of Lake Gatun in 1913 during the construction of the Panama Canal. The 15-square-kilometer island is home to one of the oldest tropical research stations in the world, where studies have been carried out for more than a century.  Yearly, more than 400 scientists visit this rainforest-covered living laboratory to study biology, ecology, evolution and animal behavior.

BCI teems with biodiversity. It is home to almost 400 bird species, some 500 species of butterflies and 500 species of trees. Lucky visitors will see (and hear) troupes of howler monkeys, colorful toucans, mischievous agoutis and millions-strong ant colonies

Dozens of trails weave through the forests of Barro Colorado. The trails for visitors include dozens of stops where guides will tell visitors about the history and scientific discoveries of the islands. The trails have moderate inclines and descents that may not be suitable for all visitors.

With views of the lush forests along either bank of the canal and the chance that you’ll cross paths with an enormous cargo ship, the boat ride to and from the island can be an adventure in itself.

A mecca for tropical biologists, Barro Colorado Island and five surrounding peninsulas provide easy access for scientists to central Panama’s lowland tropical forest. Collaborations among the more than 400 students and experts who visit each year yield research projects that help us understand one of the world’s most complex terrestrial ecosystems.

STRI was founded with the purpose of increasing and sharing knowledge about the past, present and future of tropical ecosystems and their relevance to human welfare. This work began in Panama in 1910, when the Smithsonian led one of the world’s first major environmental impact studies, which surveyed and catalogued the flora and fauna of the lowland tropical forests that would be flooded with the creation of the Panama Canal. A century later, the Smithsonian in Panama is a standard-setting global platform for groundbreaking research on tropical forests and marine ecosystems and their astounding biodiversity.

Today, STRI employs 40 staff scientists and hosts some 1,400 scientific visitors every year, from undergrads and interns to postdoctoral investigators and tenured research associates. Together, they collaborate on 350 running research projects and publish more than 400 peer reviewed articles in scientific journals every year. The research is not only shared widely around the global scientific community, but also reaches policymakers in Panama and beyond, receives media coverage around the globe, and is the foundation of an outreach and training program that reaches hundreds of teachers and tens of thousands of schoolchildren every year.

Begins by picking up guests at Panama City hotels early in the morning (around 5:45 a.m. on weekdays and 6:45 a.m.on weekdays). We will arrive to the departting dock in Gamboa an hour to 45 minutes  later  for check-in where we will  board a motorboat that will take you to BCI,.

The motorboat will take you along the Panama Canal main channel where you will enjoy the tropical rain forest  around the Gatun Lake. Also, you will see passing  vessels on their transit through the isthmus. Your guide, usually a biology student working on an ongoing research, will brief you  about natural history, and prepare the group for the walk along a trail loop that can be done in 2-3 hours.   It starts and ends at the Visitor Center, where you will find an exhibition regarding Barro Colorado National Monument. After arriving at the Visitor Center you will have a cafeteria-style lunch with a variety of dishes, including a vegetarian section. After lunch, there will be time to ask questions and relax. The ride back departs for Gamboa in the early afternoon where your driver will them take you back to your hotel.

WHAT DOES IT INCLUDE ? ground transfer, motorboat ride, bilingual guide, entrance fees, lunch.

WHO CAN GO ? Any person older than eight years, in good health and physical conditions.  Minors should be escorted by a responsable adult.

WHAT SHOULD YOU TAKE ALONG ?  long pants and long sleeve shirts, sneakers or light boots,  hat,  sun lotion, water bottle, insect reppelent, binoculars,  light poncho in the rainy season, and  set of dry clothes to change for the return trip in case of rain.

“ "Adventure of a Lifetime"
~ RakeshGPatel