A dam at the river's northern terminus, just before it meets the Atlantic Ocean, forms Gatun Lake, which makes up the main body of the Panama Canal. You'll hear the roar of howler monkeys from the vast jungle on your left and spot giant ships from a safe distance on your right as you paddle the length of Gatun Lake, sleeping  in wilderness camps along the way.

The idea of a canal across the Isthmus of Panama was first envisioned by Charles V, the King of Spain in 1534. Spanish conquistadors at that time used the natural flow of the Chagres River to transport treasures from the new world to Spain. Mules hauled their plunders over land to Gamboa where they took smaller row boats along the Chagres River from Gamboa all the way to the Atlantic. Roughly the same expedition in which you'll explore in its modern capacity on days 4, 5, and 6 of this trip.

American interest in a convenient route between the Pacific and the Atlantic oceans was Spurred from the gold rush of 1849 and led to the construction of the Panama Railway, finished in 1855. But France began the first real efforts of building an inter-ocean waterway across the isthmus in 1881, but financial hardships and 22,000 deaths, largely due to disease, brought an end to the project 8 years later.

You'll start off at the confluence of the Chagres River with Gatun Lake entering Gatun Lake alongside the Panama Canal. With the creation of Gatun Lake, many mountain tops were turned into islands. This area offers endless channel possibilities to scout. In its shores covered by dense tropical forest you will find all kinds of exotic flora and fauna. This was discovered by the Smithsonian Research Institute that has operated the famous Tropical Research Center of Barro Colorado since 1946, an Island you'll observe from your kayak as you paddle around it on your way across Gatun Lake.

At the Northern end of Gatun Lake, you'll once again enter the remains of the Chagres, as you take the river from Gatun Dam all the way to the Caribbean, ending your time on the water with a tour of Fort Lorenzo, a fortress that once guarded Spanish conquistadors from the infamous Caribbean pirates.

Lodging at Hotel – no meals provided

You will be driven to Gamboa at the confluence of Chagres River with Gatun Lake where we will start paddling across to the west side of the Panama Canal. From here, your exploration of the canal really begins.

After 3-4 hours of paddling through dense tropical forest, you will reach the Caribbean, with a view of the old Spaniard conquistadors' Fort San Lorenzo. You will be transported back in time as you explore the remains of the once crucially important fortress, that starting in the XVI century, prevented Caribbean pirates from using the Chagres to launch surprise attacks on Panama City in the Pacific.

Panama Canal tours from Gamboa is  a year-round package.
The rainy season in Panama starts in April-May and ends by November-December. Due to changing river water level it can not be defined in advance where we will stay the night on river shore.
From January through March a steady north wind prevails, that makes paddling difficult and may cause some necessary changes in the itinerary. 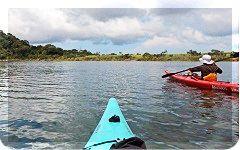