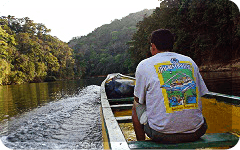 White Water river rafting close to Panama City is possible at the Chagres River which goes virtually unseen as it passes through the Chagres National Park due to the lack of accessible roads, protection against settlers, and the previous non-existence of Adventures Panama. This part of the river, characterized by currents alternating with backwaters, is considered as Class II, check Panama White Water Rafting Rapid Classification here, although several rapids are considered up to Class III by the International Classification of River Navigation.

At the Panama Chagres River Map this section extend from Rio Piedras to the Embera Village.  As a result of dense tropical forest covering the basin of the river, sedimentation is minimal; therefore, clear water can be expected very often. The flora is typical of the tropical rain forest, with more than three hundred species per hectarea. Although, it is the natural habitat of big mammals such as tapir and jaguar, tropical rainforest animals, they are very seldom encountered. However, It is much easier to spot several others samples of the fauna, such as rainforest monkeys (spider, howler, whiteface (cappuchino), Geoffrey's Tamarin), sloth, river otter, iguana, toucan, and plenty of fish.

Once in the virgin jungle of Chagres National Park you will ask if this is the next tv show survivor panama destination.

The Chagres Challenge Panama white water river rafting begins by picking up guests in Panama City at 5:00 A.M., to take them on a FWD vehicle to a remote village called San Cristobal, beyond the mountain town of Cerro Azul.
After a light breakfast, around 8:00 A.M. the tour proceeds with a hike, for about hour and half, on a narrow trail that takes us deeper into the jungle until reaching an affluent of the Chagres, called Piedras River.  We might have to continue hiking for another, hour or we might start rafting in Piedras River which is very shallow and most likely will require to get down to pass the raft in several spots.
At approximately 11:00 A.M., we will start an exciting five-hour rafting tour in the Chagres virgin jungle, all the way to Madden Lake, reaching it around 4:30 P.M. We will have a fine meal somewhere along Chagres River.
We will raft by several rainforest tribes conformed by the Embera.
Close to Madden Lake, we will board an outboard motorboat indigenous wooden canoe, for about half an hour, to the nearest road. Finally, our guests will be taken back to the original pick up site around 7:00 P.M. Be ready to get some memorable rainforest pictures !

WHAT DOES IT INCLUDE ? All mentioned transportation, rafts and gear, guides, and meals. Our guides are trained in white-water navigation skills, first-aid and CPR.
WHO CAN GO ? Any person from twelve to seventy years old, in good health and good physical shape, ready to walk for about an hour and a half through an irregular and muddy path. As a guidance limit weight values for persons to participate are as follows: up to 210 lbs, at least 6', up to 240lbs at least 6.5' . Minors must travel with a responsible adult.
WHAT SHOULD YOU TAKE ALONG ? Swimsuit or a pair of short for navigating, sneakers or light boots with good soles, a cap, sun-block, a light jacket or windbreaker (in case the weather turns chilly), a towel and dry set of clothes for the trip back.
WHAT SHOULD NOT BE BROUGHT ? Any object than can be deteriorated by water or valuables like jewels, cash, credit cards, etc. Do not bring flip flops or beach sandal to hike or raft.

USD $ 185.00 per person
Group leader will go free for a group of more than ten persons.

Although this expedition is planned to be done in only one day, it takes place in a very remote area where if something goes wrong (raft puncture, people not paddling, or a major injury that delays the group) there is a good chance that we might have to improvise an overnight camp in the jungle (not a planned camp; with out tents, supplies, etc.) and with out communications. In more than 20 years operating this trip it had happened only once so far since. You should be aware of the risks that you assume by participating on it.  If this does happens you will get out the very next day, with out extra charges (-:

The Chagres River has enough water to do white water rafting in Panama year-round. It usually reaches its highest water level by November, at the peak end of the rainy season, and its lowest water level by May at the end of the dry season. However, the Chagres Challenge one day tour, can only be offered when Rio Piedras, the tributary we put in, has enough water to paddle, usually from June through February. When there is enough water we paddle San Cristobal River into Rio Piedras River into Chagres River, 3 river in one day !

Usually it is good to paddle in rafts from June through December. In January paddling is limited to smaller rafts.

Usually from mid February until the date we close the season we restrain participation to people that knows how to paddle, are in very good shape, and preferable  they had done it before. 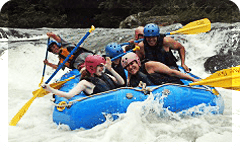